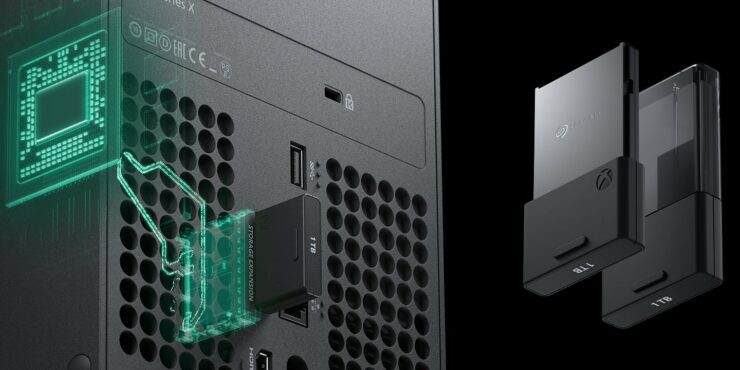 Microsoft's Xbox Series X & Xbox Series S launched with proprietary SSD solutions that let you expand the storage capacity of your consoles. These proprietary storage expansion cards are manufactured by Seagate and offer 1 TB expansion at a price of $219.99 US. That could be a bit expensive compared to standard 1 TB SSDs which come in at a cheaper price.

A workaround to this has been discovered by Chinese forum members in the form of the CFE adapter card. The Seagate expansion cards feature a modified CFE link that has been converted from Gen 3 to Gen 4 so technically, you need to modify the adapter link to convert virtually any NVMe drive to become compatible with the new consoles. Users on Reddit have been talking about this for months but this is the first time we have seen one in action!

The user bought the CFE adapter card from a DSLR/Camera shop since these adapter cards are not available widely in the tech market. A Western Digital CH SN530 SSD that features an NVMe M.2 (2230) protocol was used and equipped to the rear end of the adapter card. You can see that while the adapter card may not have enough space for a full-length SSD since the mounting holes end up short but you could still equip them & use them without issues.

2. CFe to NVMe adapters are not sold online by many people, mainly in photography accessories stores. Of course, there is also a DIY CFe card solution, but you need to polish the m.2 solid state. If you need it, please search in the orange software. Polishing solid-state hard drives will have certain risks, so be cautious if you have poor hands-on ability!

The adapter board is limited to Read speeds of up to 1700 MB/s and Write speeds of up to 1480 MB/s so it's pointless to invest in a high-end SSD. Just grab one that features similar speeds with the capacity of your choice and enjoy a non-proprietary storage solution. There are several PCIe Gen 3 NVMe 1 TB SSDs that cost under $100 US, half the price of Microsoft's own expansion SSD solution, and will work just perfectly with the adapter card. You can also technically use capacities beyond 1 TB though this has not been confirmed. The mounting procedure is very simple as all you need to do is to equip the drive to the adapter card and then plug the adapter card within your Xbox Series X or Xbox Series S console. The drive has been shown to operate normally but there are some issues related to formatting the drive as once it's used, the drive may no longer operate as intended, even after formatting so it's wise to just use the drive on your Xbox console and be done with it afterward. The full installation guide is provided here.