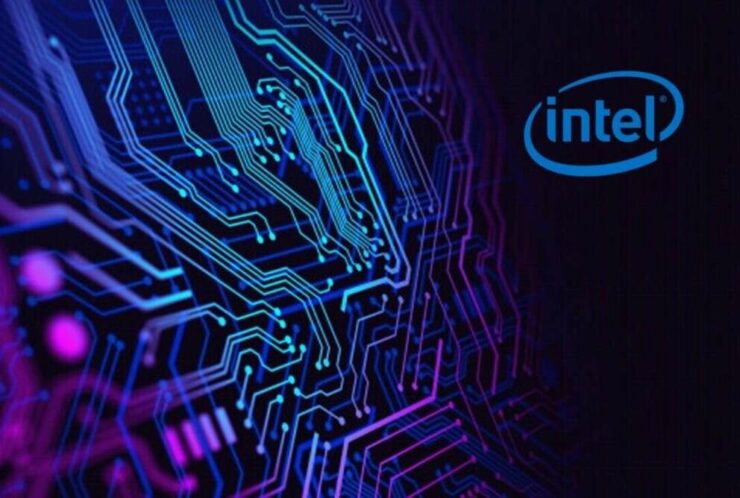 Intel (NASDAQ:INTC) is now a company on the cusp of significant reforms. After a change of the guard at the top echelon of the semiconductor behemoth, spurred by the hardball tactics of the activist hedge fund Third Point, Intel appears to be gearing up for an expansive partnership with TSMC. Against this backdrop, today’s earnings announcement by the company for the last quarter of 2020 has taken on an added significance.

Intel (NASDAQ: INTC) Financial Scorecard for the Fourth Quarter of 2020

For the three months that ended on the 31st of December 2020, Intel reported $20 billion in revenue, registering a decrease of 1 percent relative to the comparable quarter last year. For the full year, Intel earned a revenue of $77.9 billion, corresponding to an increase of 8 percent relative to 2019 levels.

(All figures are in billions of dollars)

Before analyzing Intel’s segmental revenue for the quarter, readers should note the consensus expectations regarding the company’s business

(All figures are in billions of dollars)

The performance of Intel’s business segments is as follows: 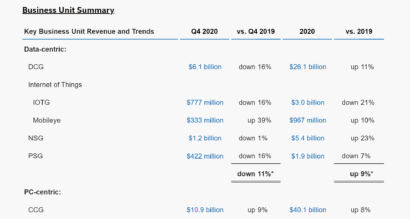 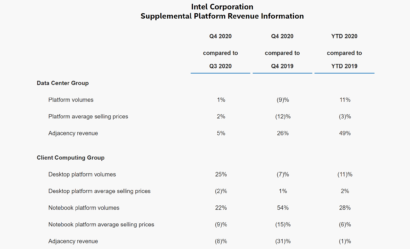 Intel's other key financial metrics are as follows:

(All figures are in billions of dollars; cash from operations is based on year-to-date numbers)

(All figures are in dollars)

As far as the guidance for Q1 2021 is concerned, Intel expects to earn a GAAP revenue of $18.6 billion. This is higher than the consensus analyst expectation of $16.08 billion. Moreover, Intel expects its operating margin to compute at 27 percent (on a GAAP basis) during the first quarter of 2021. 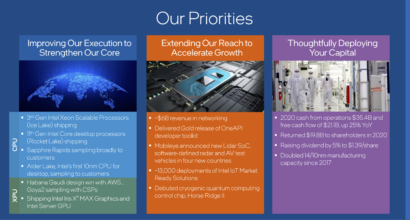 As far as Intel's product line is concerned, the company noted in its press release:

As mentioned earlier, Intel was widely expected to announce a formal collaboration with TSMC during this earnings release cycle for the mass production of its next-generation entry-level, mid-range, and high-end CPUs on the 5nm and 3nm process nodes. While the press release does not include any further guidance on this matter, we will continue to follow the earnings call for further details. Of course, this move, should it materialize, would allow Intel to regain some of its competitive edge that it has lost on the back of the incessant delay in the launch of its products based on the 10nm and 7nm nodes.

The market has reacted positively to Intel’s financial reporting, with the stock posting a gain of over 5 percent in the after-hours trading mainly due to a healthy beat on EPS.

Recently, Intel announced that its CEO, Robert Swan, would step down on the 15th of February 2021. He would be replaced by the former CEO of VMware, Pat Gelsinger. This leadership change is intended to help Intel transition to a “multi-architecture XPU company". Nonetheless, the move follows a series of high-level contacts and a scathing letter that was penned by Third Point’s CEO, Daniel Loeb, to the chairman of Intel, Omar Ishrak. The letter had demanded that the semiconductor behemoth rectify its debilitating brain drain issue and evaluate strategic policy options, including spinoffs and joint ventures with other industry players. 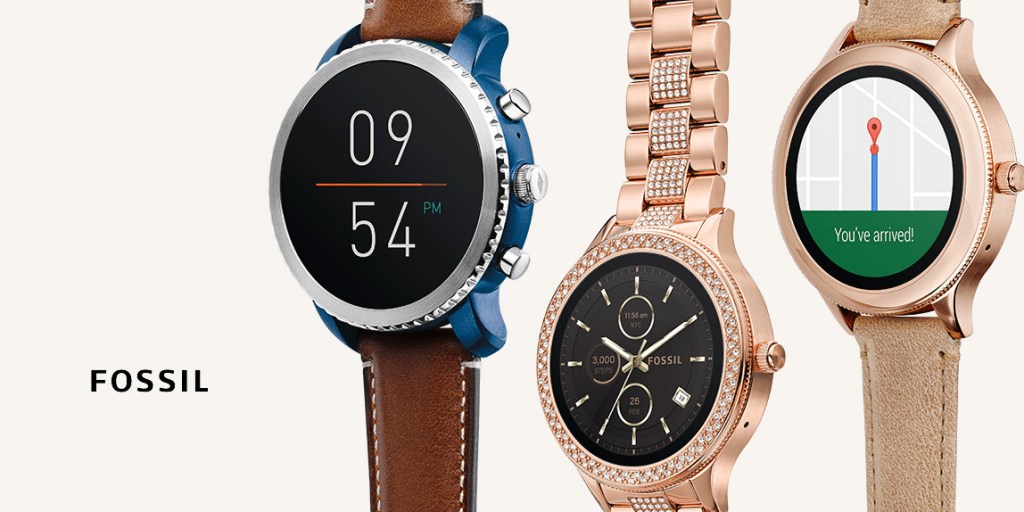