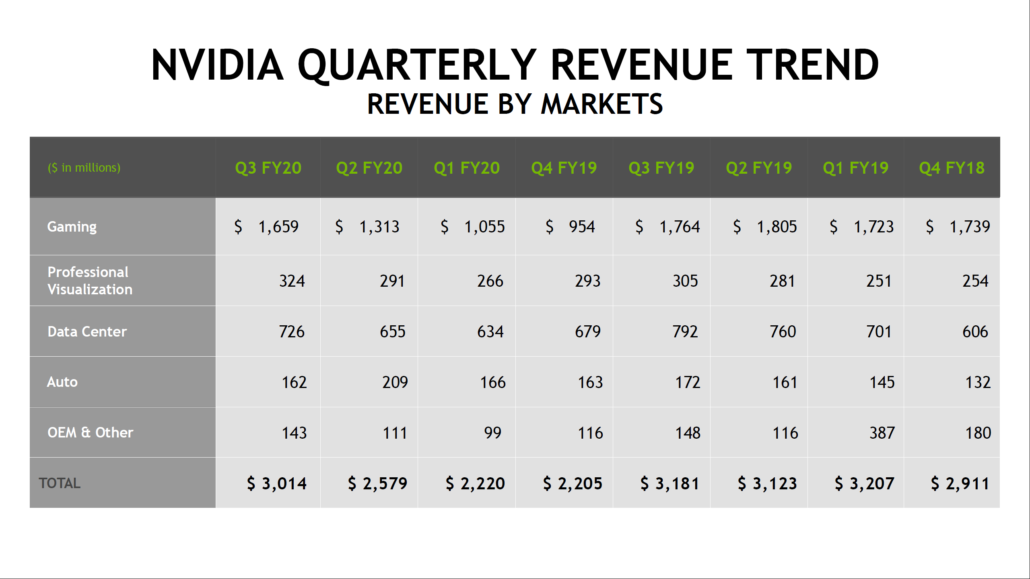 NVIDIA has announced its financial results for Q3 Fiscal Year 2020 with a revenue of $3.01 Billion. According to NVIDIA, strong demand in gaming and hyper-scale businesses was the main driver for the third quarter, leading to a 17% increase in revenue from the previous quarter.

For Q3 FY20, NVIDIA has reported a total revenue of $3.014 Billion which is up 17% from the prior quarter and 5% down sequentially. NVIDIA's CEO, Jensen Huang, has highlighted that gaming and hyper-scale customers powered their Q3 results.

“Our gaming business and demand from hyperscale customers powered Q3’s results,“ said Jensen Huang, founder, and CEO of NVIDIA. “The realism of computer graphics is taking a giant leap forward with NVIDIA RTX.

“This quarter, we have laid the foundation for where AI will ultimately make the greatest impact. We extended our reach beyond the cloud, to the edge, where GPU-accelerated 5G, AI and IoT will revolutionize the world’s largest industries. We see strong data center growth ahead, driven by the rise of conversational AI and inference.”

Coming to the revenue breakdown per market, gaming revenue saw a 26% quarterly increase and a 6% decline sequentially. The gaming revenue was reported at a total of $1.659 Billion. The pro & visualization revenue was reported at $324 Million which is an 11% increase (Q/Q) & a 6% increase (Y/Y). The Data Center revenue also saw an 11% increase from the previous quarter with a revenue of $726 Million.

NVIDIA’s outlook for the fourth quarter of fiscal 2020 does not include any contribution from the pending acquisition of Mellanox and is as follows: